Ultra Wideband (UWB) is a wireless technology that is now becoming standard in the latest smartphones and other consumer electronics. Is it radar? 5G? Or is it how we can find our keys using AirTags?

I've read several articles in the tech blogosphere that have made some incorrect claims about UWB[1] and I want to clarify what it actually is, what makes it so special, and how it compares to other wireless technologies.

Ultra Wideband technology has been around since the introduction of radio transmissions when Heinrich Hertz proved the existence of radio waves in 1887 using his experimental spark-gap transmitter.

A century later, US government agency DARPA spent $25M researching Ultra Wideband for use in anti-stealth military radar. And in 2002, UWB became commercially viable when the FCC opened up 7.5 GHz of bandwidth for Ultra Wideband applications.[2]

After the FCC opened the floodgates for commercial development, big companies, startups, and VCs started pouring investment into UWB development.

The WiMedia Alliance was formed to promote the transfer of videos and other files using a technique called Multiband-OFDM and after a couple of years, Intel was able to demonstrate Wireless USB. At the same time, the UWB Forum was also founded to pursue a competing architecture called Direct Sequence UWB.

But it wasn't quite catching on. In 2008, Dean Takahashi, reporting for VentureBeat[3], wrote:

For years, UWB technology has been a solution looking for a market. In essence, it’s meant to move high-quality digital video from one gadget in a room to another at a high speed.

Mark Bowles, a co-founder of Staccato Communications, shared in a LinkedIn post that over $1B was invested into bringing Wireless USB to market using UWB.[4] 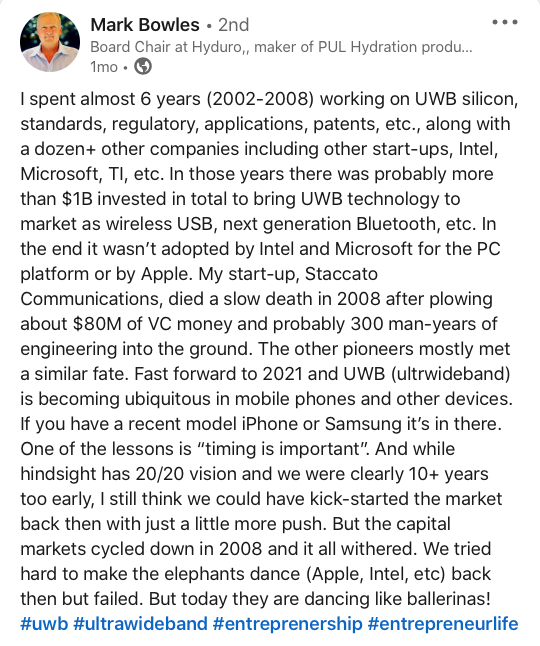 The market for Ultra Wideband never materialized and slowly the startups and business initiatives started dying off. VentureBeat declared the death of UWB in 2009, the UWB Forum and WiMedia alliances disbanded, and high hopes for UWB in consumer tech vanished.

UWB finds its killer use case

But that wasn't the end for UWB. Coming back with a new unique architecture, it found its perfect use case.

Instead of using the OFDM technique for transferring data, the industry transitioned to Impulse Radio or IR-UWB. What makes IR-UWB unique compared to Narrowband technologies like Wi-Fi and Bluetooth is that it sends very short pulses only 2 nanoseconds long.

Besides benefits like low power, low latency, and better reliability, UWB fills a gap that no previous mainstream wireless standard has yet to provide—accurate ranging.

Using Impulse Radio, UWB devices can know the distance they are from each other by measuring the time it takes the radio signal to travel between them. This is called Time of Flight ranging (ToF). These measurements can be accurate to under 10 cm which makes UWB ranging up to 100x more accurate than signal strength-based ranging (RSSI) using Wi-Fi or Bluetooth.[5]

This gives devices accurate spatial context in relation to each other which allows them to naturally interact together in the physical world.

UWB's place as a mainstream wireless standard was cemented in September 2019 when Apple released the iPhone 11 which included their U1 Ultra Wideband chip.

When Apple finally embraces new technology, you know it's been rigorously considered. They have since created an ecosystem of products with UWB including the HomePod, AirTag, and Apple Watch. And the rest of the smartphone manufacturers are following suit.

UWB arrives alongside a recent outburst of other exciting communication and sensing technologies like mmWave radar and 5G. For consumers, understanding the differences between them is confusing due to their similarities, wide-ranging use cases, and inconsistent branding.

As shown in the diagram below, the narrowest scope seen in the smallest circle is UWB used for ranging. This is what UWB currently is being used for in the latest consumer tech like iPhones and AirTags.

Outside of the ranging scope is the FCC's definition when they opened up the frequency spectrum between 3.1 GHz to 10.6 GHz for Ultra Wideband applications. The three categories they outlined are (1) imaging systems, (2) vehicular radar systems, and (3) communications and measurement systems.

Even broader than that are a variety of applications that use ultra-wide bandwidths like new mmWave radar devices and Verizon's 5G Ultra Wideband cellular network.

The broad scope of "Ultra Wideband" technology introduces a branding problem because it can mean so many things.[6] It could mean radar, 5G, Wireless USB, peer-to-peer ranging, etc. It is important to be clear that the UWB implementation that exists in the latest smartphones is currently for ranging and will soon be used for data transfer as the technology matures.

The Institute of Electrical and Electronics Engineers (IEEE), which develops and disseminates standards for other wireless technologies like WiFi, has been working on standards for UWB. The latest 802.15.4z spec details secure peer-to-peer ranging. The broader standard for personal area networks (PANs), which includes UWB data transfer, is covered in the 802.15.4 spec.

The most active industry group lately, the FiRa Consortium is focused on UWB ranging interoperability (the name "Fi-Ra" is an abbreviation for fine ranging). Another group formed a year prior, the UWB Alliance, covers all the different use cases allowed by the FCC including imaging and radar. Unlike the previous groups that had competing interests and are now defunct, the FiRa Consortium and UWB Alliance announced a formal liaison in 2020. There are some other groups like the Connected Car Consortium (CCC) working on the promotion and standardization of UWB as well.

What is UWB's killer app?

As seen by their current focus, FiRa believes UWB's killer app will be seamless access control. From their website on What UWB Does:

By calculating precise location, fine ranging based on UWB is a more secure approach to closing and opening locks, whether those locks are installed on a car door, a warehouse entryway, a conference room, or your front door.

What makes UWB so compelling for proximity-based authentication is that it is immune to man-in-the-middle attacks because ToF ranging measurements can't be spoofed by malicious devices. ToF provides secure proof of presence.

Once the data transfer capabilities become better optimized and standardized, UWB's potential will really shine in wearables and AR/VR.

Startup company Spark Microsystems is working on UWB for low power low latency data transfer. Compared to Bluetooth, they claim 10x more data throughput, 60x lower latency, and 40x improvement in power.[7] This will enable wearable technology like smart glasses, headsets, watches, and other devices to not only have spatial awareness but much better power consumption, data transfer, and lower latency which are some of the biggest challenges in wireless AR/VR.[8]

These new contextual capabilities will spawn new startups and experiences like how smartphones with cameras and GPS enabled Instagram and Uber. I can't wait to see how people will use this creatively.[9]

It is good to see UWB finally find its footing. It means that investment and development will continue to pour into the space and that soon everyone's smartphones and wearables will have UWB. This will enable many breakthroughs in human-computer interaction[10], augmented and virtual reality, gaming, and security.

If you want to talk more about UWB or other sensing technologies like mmWave radar, let me know at josh@joshhorne.com.

1. A few articles from Stacey on IoT incorrectly mention UWB applications being in the 60 GHz (mmWave) spectrum: RF sensing is big news, so here are the other options, Are you ready for the coming UWB revolution?, and Even the FCC agrees: 60 GHz radar is big for the Internet of Things.

In the Computer World article Ultra Wideband (UWB) explained (and why it’s in the iPhone 11) Jack Gold also mixes UWB up with radar.

Brian Roemmele, who was probably the first to report on Apple's U1 chip, has a very insightful Quora article, What is the Apple U1 chip, and why is it important. He mentions that the U1 chip could "echo locate your spacial world" which is not possible.

These articles probably misled metaverse expert Matt Ball in his article Hardware and the Metaverse when he said the new iPhone has ultra wideband chips that can create radar maps of your physical environment.

If you are looking for radar on a smartphone a good example is Google's Soli which is noticeably different than Apple's U1 chip. Lidar is the most appropriate technology for mapping our physical environment.

2. The FCC opening up bandwidth for unlicensed use is a big deal because it means companies don't have to request special permission from the FCC and don't have to spend billions to secure their own airwaves like AT&T and Verizon.

3. Will ultra-wideband high-speed wireless technology ever find its market?

4. An interesting comment on this thread from Samir Soliman, who was VP of Technology at Qualcomm during the time, hints there may have been some beef with the Bluetooth SIG... This doesn't surprise me given UWB's advantages over Bluetooth.

5. If you have multiple antennas then UWB can also tell you the angle between the two devices. This is how the iPhone can point you in the exact direction of your AirTag.

6. Amazon Sidewalk (which is basically just a LoRa network) is a good example of what happens when consumers don't understand the technology and leads to headlines like Amazon Sidewalk Will Push Neighbors to Share Wi-Fi Through Smart Devices. If UWB is being erroneously touted as echolocation radar, people might fear some Batman-style surveillance.

A side note to this is that ultrasonic waves were secretly used at one point to track people's locations.

7. Steve Cheney, a co-founder of real-time location startup Estimote, predicted in his 2009 article, On the Internet’s Next Act, that UWB will displace Bluetooth.

8. Facebook and Ray-Ban’s “Stories” Smart Glasses: A Glimpse Into the Future of AR/VR and UWB

9. 3D artist, John Orion Young, talks about how Apple is aligned to execute on AR/VR with their wearable ecosystem and standardized usdz file format in The JOYWorld Mini-Documentary. The spatial awareness between devices will happen via UWB.

Apple's kind of lined themselves up already perfectly. They have AirPods that you put in your ears that can track your head motion and can do your spatial audio. You have your watch that can be your interface through virtual reality. So all they need is a pair of lenses to be powered by your phone.

10. Apple's WWDC video Design for spatial interaction shows the tip of the iceberg of how UWB can improve human-computer interaction.